NHS Data Sharing: Another Expropriation of a Public Good

Last week the Secretary of State for Health and Social Care announced a new partnership between the NHS and Amazon where Amazon’s virtual assistant Alexa will be able to scan the NHS website to answer users queries with NHS validated responses.

The National Health Action Party responded to the announcement by warning that the Health Secretary should refrain from entering into any further data sharing agreements without first having consulted the public and parliament.

An announcement posted this week on the Department for Health and Social Care’s website has now revealed that the Health Secretary is in the process of creating a new framework to both promote and regulate the sharing of NHS data with private enterprises.

The Health Secretary’s commitment to the sharing of NHS data through so called “public-private partnerships” raises a whole host of questions. Especially when past partnerships such as Private Finance Initiatives (PFI) became little more than vehicles for private capital to exploit the health service. The biggest of these questions can be boiled down to the following: will the public and the health service upon which they rely benefit from the increased sharing of public data with private enterprise?

The National Health Action Party believes there a number of reasons why this will not be the case. One of these reasons refers to the fact that tech companies are structurally reliant upon venture capital to fund the production of new technologies. As a consequence, this regularly leads tech companies to oversell what their technology can do. A classic – and all too recent – case of this is GP at Hand.

Babylon Health who developed the GP at Hand app claimed that the app’s AI was as accurate as a doctor when it came to the diagnosis of potential illnesses. But once the AI was subject to scientific peer review in the Lancet it quickly transpired that the AI was woefully lacking and could in some cases poses a danger to patient safety. Similar cases of over selling have led the Advertising Standards Agency to rule that tech companies have directly misled consumers whilst in one case the founder of a Silicon-Valley based blood testing technology company was arrested for criminal fraud.

But even if we assume that tech companies will be constrained by the regulatory framework Matt Hancock would like to put in place – a big assumption – this still would not prevent this privately-owned technology from embedding itself in the infrastructure of the NHS. Rosie Collington recently made this point in the pages of Our NHS when she argued:

“Perhaps the most significant danger of not only providing private actors like Google with access to these valuable [NHS] datasets, but also investing in them to develop new technologies instead of our existing public sector research institutions, is that we are creating today new institutional dependencies on these companies to deliver services in the future. Once the partnership with a technology company ends, and its technologies have become established infrastructure or tools in the NHS, what political leverage will we have to negotiate new agreements that are beneficial to the public purse?

Ultimately, by relying on these unaccountable, shareholder-driven private actors to develop these technologies, deliver innovation and thus also build new knowledge bases and expertise, we are fostering new knowledge asymmetries. Public-private partnerships that involve big data transfer will not only weaken the power of the public sector in the future, but also potentially risk more instances where public actors are simply unable to assess the claims made by tech companies about what their products can do.”

What Collington succinctly points out is also what the National Health Action Party has been arguing for some time: that the government has been at the forefront of fostering markets within public services which have both failed to add value to those services and instead has acted to merely extract value from these publicly owned goods which ought to be held in common. As Collington and others such as Phil Booth have pointed out it is the private companies which are reliant upon the NHS for this data, as they can’t amass such a vast quantity of high quality data on their own.

Consequently if we had a government with the best interests of its citizens at heart then we could rely upon it to recognise this position of strength and to act from it. Meaning that it would attempt to forge a series of public-private partnerships which were genuinely cooperative in nature and had the well-being of patients as its ultimate aim.  But we know that this wont happen under the Conservatives. Instead this new framework for data sharing will merely act as yet another mechanism with which the exploitation of a public good by private capital can be branded as a "partnership."

Consequently, we have to recognise the Health Secretary’s latest announcement for what it is, yet another opening in the ongoing battle being waged by this government against the NHS. Where the ultimate goal is to both parcel it up and sell it off whilst manufacturing a series of conditions which lead to a decline in the NHS’ performance in the hope that this will then morally legitimate arguments for its privatisation.

The UK is in a mess. But millions of people have been falsely manipulated into believing that the blame lies with the EU. 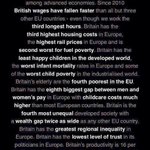