Following our Freedom of Information request campaign launched in January this year, The Independent has published an exclusive report on the substantial private healthcare income of several NHS hospitals. In particular, the Royal Marsden stated that over the last 5 years the number of private patients using their facilities has increased by 31%, and private healthcare now represents nearly a third of the trust's income. Furthermore, the trust admitted that NHS patients are sometimes placed in what are now 'private' beds due to a shortage of NHS beds.

There is a real risk that this two tier system being created inside the NHS will lead to degradation of care as trusts prioritise paying clients above those who cannot afford insurance. As Nye Bevan put it, "a two-standard health service is merely the old British Poor Law system over again. The essence of a satisfactory health service is that the rich and the poor are treated alike, that poverty is not a disability, and wealth is not advantaged."

We'd like to thank all of you who submitted FoI requests to your local hospitals, and in particular Jessica Ormerod and Deborah Harrington (now of the Public Matters think tank) who worked on this project for the NHA earlier this year.

"Private providers have been asked to apply for a new £10bn deal... to reduce [NHS] waiting lists"
- Sunday Times

How private healthcare has profited from Covid - Sunday Times:

@littleblueshed @martindvz @marcuschown Absolutely - it would be extremely helpful if the witnesses quoted by the Sunday Times on 22 March would now come forward and confirm Cummings's specific criminal statement re the deaths of "pensioners", and his deliberate herd immunity policy https://t.co/GnGuS5VqoO

Cost of Covid to UK so far - 2 US Apollo space programmes, 15 channel tunnels or 32 years of EU membership. 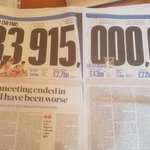 The BBC should do an hour-long special on the benefits of Brexit.

Explain all the good things we can look forward to.

It's a little puzzling to me why they don't.