The National Health Action Party is campaigning not only to defend and improve the NHS but also to promote health in its widest sense with policies on a range of issues that impact on the health and wellbeing of individuals and society, including housing, transport, the environment and the economy.

We're fighting for a healthy NHS

We're fighting for a healthy Britain

Invest in Housing - launch huge programme of social house-building,  drawn up in conjunction with local people's needs and concerns, including improving and upgrading current housing stock and tackling the number of  empty homes. Improve conditions for rental tenants.

Fairer society and economic growth - reject austerity policies, which unfairly penalise the vulnerable, bring in a living wage, and prioritise cracking down on corporate tax evasion and avoidance to ensure those who can afford it,  make a fairer contribution to society.

Reform EU - make the EU democratically accountable to voters, with the public able to hold elected officials to account; end secrecy and curtail  power of lobbyists; oppose the TTIP

Labour should announce that, if elected, it would conduct a full review into contracts awarded by this Government above, say, £100m in value and, where they were improperly awarded, recover all profits from those who benefitted.

The smoking gun speech #BorisJohnson gave in Greenwich Feb 2020 when he effectively compared his govt to Clark Kent Superman and how he would handle Covid19 differently. Well 100,000 deaths later we see that Superman Johnson truly has blood on his hands https://t.co/NFciOyXmfY

How many UK journalists will remind audiences of Boris Johnson's infamous 'Superman' speech in Feb 2020?

This was when Johnson was ignoring WHO advice and wider medical calls to ‘test, test, test’ and to move into lockdown.

⚠️ No Welsh data on 28 day deaths by date of death 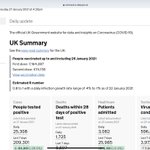