Home > Our Policies > Our 2017 Manifesto > Our vision for political reform

There are profound faults in the UK political system. Public confidence in both individuals (MPs, peers and civil servants) and the wider political system has been undermined. This has resulted in increasing numbers of people failing to engage with politics at all, thus destabilising our democracy. We therefore believe that reform is essential.

A parliament that works for people, not politicians

We support a completely new second chamber to review proposed legislation. At least 80% of the members of a reformed Upper House should be by direct election using a single transferrable vote system. The remaining members to be appointed for fixed terms on the basis of expertise in specialist fields such as science, technology, health, education, business, charities, the voluntary sector, local government and trade unions.

Govt minister says contract tracing is difficult as it's "an entirely new infrastructure which there's no precedent for".

Smallpox was eradicated by exhaustive contact tracing, a technique that has been around for decades. The govt need to find a better excuse!

While the daily case count in Spain rose past 2,000 last week and France’s surpassed 1,000, @LionelRALaurent points out that Italy and Sweden’s daily cases are averaging around 200 each, with no rebound in sight.

What are they doing differently? https://t.co/EXFabqXRqA 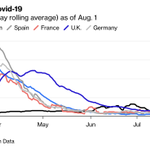 'They already don't have any more beds available in ICU... it's a humanitarian disaster' - witness on the ground in Beirut says the coronavirus means hospitals are already struggling.

At least 10 people have been killed in a huge explosion.